Each is unique in the natural properties they display to us.  Pearls have luxurious luster, Alexandrite a unique and amazing color change and moonstones an adularescence unmatched by any other gemstone.

When we think of pearls, we often associate them with Mikimoto who, in the early 1900s, obtained one of the first patents for the process we know as culturing.  Mikimoto was the first to insert a small round sphere into an oyster to “grow” a pearl.   Pearls have been worn and admired for thousands of years. The Crusaders believed the Holy Grail was embellished with pearls, the Roman Empire considered them a status symbol which the wealthiest of citizens wore.  In Tudor England, Henry the Eighth wore them as well as many other royals and those that aspired to be.  Today, pearls range in many natural colors and well as dyed or enhanced colors, sizes and shapes.  Japanese Akoya pearls with their beautiful round shape, white color and elegant luster are a traditional classic, worn by women all over the world.  Bold, rich, Tahitian pearls exhibit shades of smoke grey to green and aubergine with amazing luster and larger shapes make them an unmistakable luxury fashion statement.

Alexandrite was discovered in the Ural Mountain region of Russia in 1830 and was named after Czar Alexander II.  Fine alexandrite exhibits a bluish green color in natural daylight and changes to red and reddish purple in an incandescent light source.  Rarely do we see them larger than 1.00 carat and larger alexandrite with a defined color change are coveted and high-priced.  Alexandrite is a variety of the mineral species chrysoberyl which also is known for its’ cat’s-eye.  Often when chrysoberyl exhibit it’s cats-eye the gem stone exhibits a semi-translucent yellowish-green to grayish and even yellowish-brown color and are seen cut in the cabochon or dome style.  Sometimes, very rarely, an alexandrite exhibiting its’ enchanting color change phenomenon, will have a cats-eye too!  This is a gem collectors’ prized gem stone. 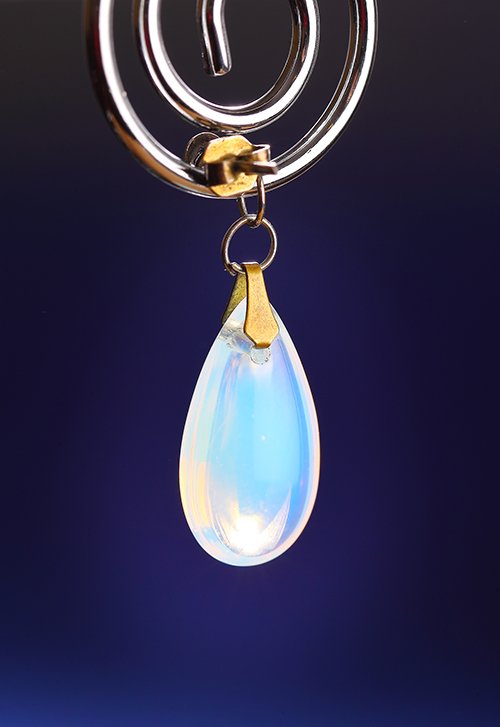 Moonstone was so named by the ancient Greeks because this gemstone shows off an ethereal billowy silver blue color, likening it to the moon.   Actually, moonstone is from the Feldspar group and is composed of two minerals from the feldspar group– orthoclase and albite–and those two mineral crystal structures grow in alternating layers, which creates the refraction within the gemstone causing the adularescence or billowy effect we see.  The moonstone shimmers from within and is most often cut in the cabochon style.  The finest moonstone hails from Burma, India and Sri Lanka but are also found in other regions of the world and can exhibit soft, pastel like colors.

Moonstone was a favored gemstone for designers during the Art Nouveau era and can be seen in pieces created by Rene Lalique and also in the Arts and Crafts movement during the late 19th century.

Today, moonstone is seen in carved cameo like shapes and occasionally faceted. However, a fine moonstone cut in cabochon style is unmistakable and captures your attention with is silvery, mesmerizing, billowy sheen.